We like it. The idea arose from a group of friends whose goal was to create a place (real for past events and those in progress, and virtual on these pages), where all of us, all so very different from one another yet all the while sharing the same ... passion? ... belief? ... source of inspiration? ... could meet and get to know each other.

A community. People bound by a common interest. “The Ties that Bind”, the subtitle of our new name, makes this declaration.
"…It's a long dark highway and a thin white line. Connecting baby, your heart to mine..."

How else could it be?

It all started with Alberto Lanfranchi’s idea in 2016. Sure, it’s a recent story but its roots go back. 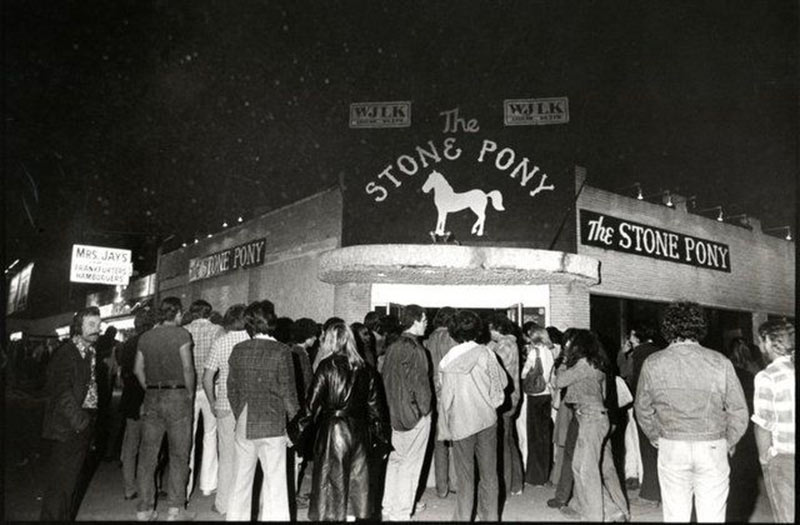 We’re talking about the summer of ‘87 when my cousin Luca and I met Springsteen at the Stone Pony in Asbury Park.

It was around 1 pm and after wandering around Asbury Park to see all the places Springsteen had made famous, we found ourselves almost by chance in front of the Stone Pony. So here we were in front of the Stone Pony with two possibilities. Either do something to try to get in... or go back to New York. We opted for the first solution. But here, too, it was luck that helped us because all of a sudden I realized that a side door was half-open. I went up and whispered to my cousin to go inside... Then I said to my cousin, “Look, we’ll go in, take a couple of pictures and be on our way.” ...And to think that he was undecided. I mustered my courage and opened the door... suddenly a man holding a broom asked us where we were going but after our response in English that was a bit school-level but understandable, he let us in. So, we began to look around all disoriented and in disbelief. My cousin always had his camera with him to take pictures here and there. I mean, we were inside the Stone Pony.

You can read the rest of the story in the book written by Alberto Lanfranchi: “DIARIO DI UN SOGNO” E quell’incontro allo Stone Pony ad Asbury Park (Diary of a Dream and That Encounter at the Stone Pony in Asbury Park). 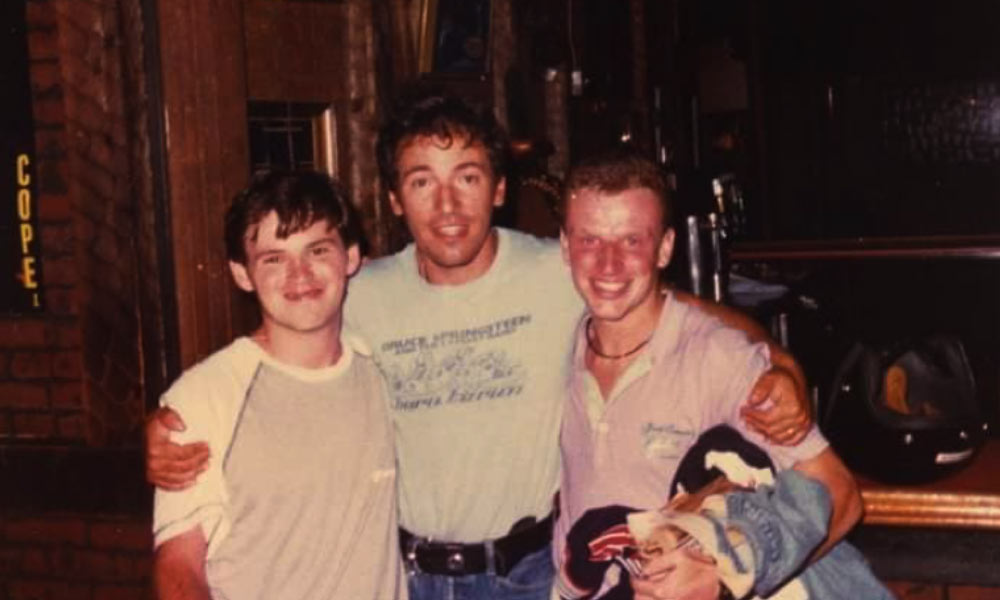 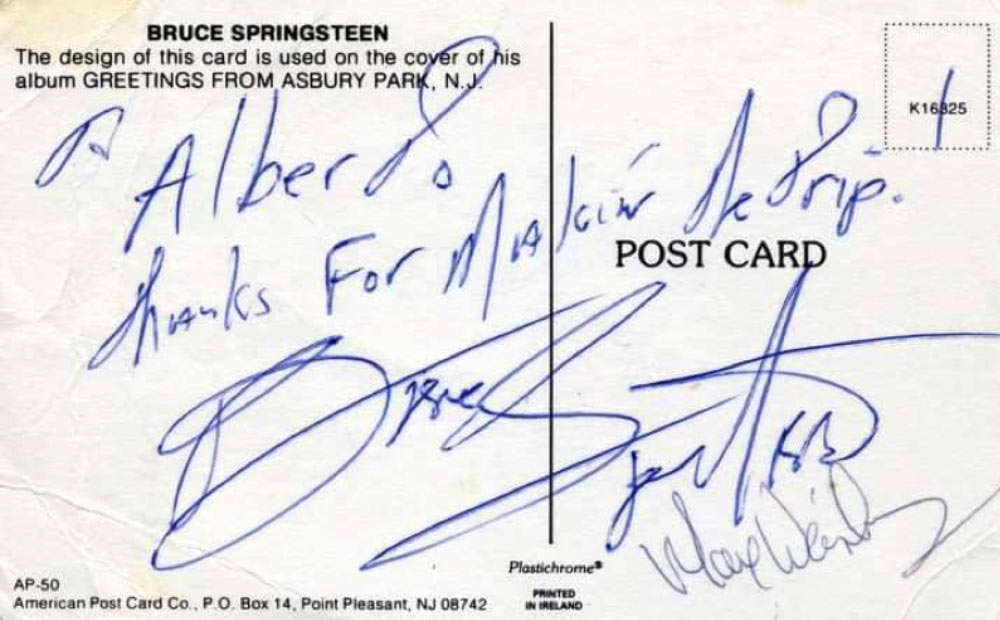 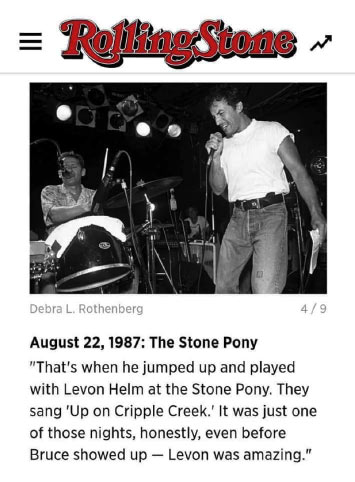 A shot from that evening became the cover for an article in RollingStone and the New York Times, and then, just a couple of years ago the story of the Stone Pony was told through the voices of the characters and artists who had played in this wonderful venue over the years.... Well, we too were in this article with our story and version of what had happened. Of all the concerts...and that evening, no less!
Fate can be wonderful at times.
That evening, we saw Levon Helm in concert.
Mark Levon Helm was an American drummer, singer and actor who was famous for playing in the Canadian rock group The Band. Levon Helm was particularly known for his soulful, country-sounding voice, as well as his syncopated drumming style!!!!
Did you hear me? Damn, we’d just seen a great concert, not to mention the Boss!!!
The evening was over before we knew it... because wonderful moments pass quickly.
We found ourselves in our motel room in no time. Before going up the stairs to our room we asked the lady at the reception if anyone had been looking for us... Remembering Springsteen's question: what room number?...
Unfortunately, the answer was no!
Happy and excited all the same, we tried to sleep but it wasn't easy with the sound of the Stone Pony that kept tickling our ears!
Night, brothers!!!!

NOI & SPRINGSTEEN aims to promote, develop, and pursue cultural goals related to the artistic and musical spheres of the Springsteen world, as well as promoting and organizing cultural events dedicated to him on national and international levels. First of all, the Festival Noi Raccontiamo Springsteen (The Word On Springsteen) which has been livening up the city of Bergamo since 2017, transforming it into a second Asbury Park for a few days.
Journalists, musicians, writers and fans come together in the wonderful setting of Città Alta, creating an event composed of words and music.
Over the years we have had as guests Claudio Trotta, promoter of Springsteen as well as founder of Barley Arts, Massimo Cotto (voice of Virgin Radio), and other important names such as Carlo Massarini, Patrizia De Rossi, Leonardo Colombati, Paolo Vites, Mauro Zambellini, Davide Sapienza, Fabio Santini, Alessandro Portelli and Gino Castaldo.
Of the musicians, we like to remember the concerts of Moa Holmsten, Massimo Priviero, Roberta Finocchiaro and then the performances of many other musicians close to Springsteen's sound and style.
And then there are other minor events involving the presentation of books dedicated to the Boss, theatrical performances and to top it all off, the Musical Contest dedicated entirely to Springsteen, whose first edition closed on August 30, 2020 at the wonderful location of the Seminarino in Città Alta.

“We believe that music, like every other form of art, can be a powerful way of disseminating a shared meaning of life and fundamental rights which must be guaranteed to all human beings”.

That's who we are, and what we want to do. And everything will be a lot easier with you following us.